The store will not work correctly in the case when cookies are disabled.

Gonzo Odor Eliminator is made of non-toxic, volcanic minerals which absorb odors and moisture naturally, without perfumes or cover-ups. These environmentally safe rocks are a natural alternative to other air fresheners and are safe for your children and pets. Recharge by placing in the direct sunlight, making them ready to absorb unpleasant odors again. 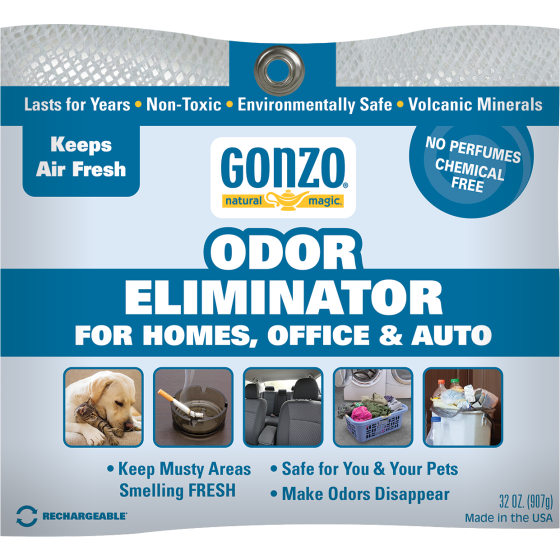 *When used as directed. This is non-inclusive of packaging.

What is the rock material in the bag?

The Gonzo Natural Magic volcanic rocks are an all-natural mineral (also known as Zeolite). Odors have a positive charge The volcanic minerals have a negative charge, which act like a magnet to attract and hold unpleasant odors.

Yes. The Gonzo Natural Magic Natural Odor Eliminator bag only contains one ingredient, volcanic mineral, which has no chemicals and is non-corrosive, non-irritating and not sensitizing to skin or eyes*, making is safe to use around pets and children.

How do I recharge the bag?

Simply place bag in direct sunlight for 6 hours to completely restore the effectiveness of the volcanic material. Recommend flipping bag over occasionally to fully restore effectiveness.

What size areas do the bag sizes cover?

*When used as directed. This is non-inclusive of packaging.